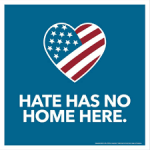 No Hate, Only Love

Webmaster for the Presbytery of Lake Erie…

When you walk into the West 7th Street entrance of the First Presbyterian Church of the Covenant in downtown Erie, there is a distinctive sign on the door that delivers a clear message. It reads “Hate has no home here.” This poster is also displayed around Erie at various businesses and other places of worship. Erie “One Table” held an event last year and made the posters available in response to an increase in incidents targeting the Jewish and Muslim communities across the country. Then, a gunman entered the Tree of Life Synagogue in Pittsburgh’s Squirrel Hill neighborhood last October, killing 11 congregants and injuring several others including police officers.

Seph Kumer, Director of Community Engagement at First Covenant, said after the deaths in Pittsburgh, in a house of worship relatively close to Erie, it was time to send a clear message here. “Hate in its various forms and expressions is on the rise. We have many people entering our building every day who speak the languages used on the poster: English, Arabic, Korean, Spanish, even Hebrew!  Plus, Preschool families, international university students, local refugees, and local folks attending meetings and events nightly at First Covenant,” said Kumer. 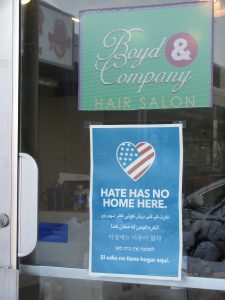 The “Hate has no home here” sign is displayed on the entry door of a local Erie business owned and operated by George Boyd.

George Boyd is the owner/operator of a hair salon in west Erie. When he was asked to consider placing the “Hate has no home here” sign at his business, he did not hesitate. “In the past few years I’ve noticed a marked increase in anti-Semitism and anti-Muslim rhetoric.  During the 2016 Presidential campaign and subsequent election these sentiments seemed to skyrocket.  In my business, educated women began to feel open to expressing these concepts.  I grew up in a community of people of Conservative Jewish faith.  Though a Christian, the idea of anti-Semitism was quite foreign to me.  All my preschool neighborhood friends were Jewish..  I try to understand people who did not have the opportunity for the best education and little experience with diversity harboring these views, but was shocked to hear hateful comments of bigotry from the retired school teachers with masters degrees who had been directly responsible for educating young minds. When one of my Jewish friends who is affiliated with “One Table”  brought the “Hate has no home here” sign to my salon, I put it on the door immediately.  I was hopeful that would end such talk.  For the most part it was successful.  I regret to report that one of my retired teachers asked me if that sign was meant to hurt her.  Although I was disappointed by her comment, it made for a dialog resulting in a respectful understanding for us both.  A respectful dialog is our best path forward.  We must work toward inclusion and away from division,” said Boyd.

In the fall of 2016, residents in the North Park area of Chicago, wanted a way to peacefully protest the divisiveness that erupted after the presidential election. In response, a third-grader came up with a message that declared, “Hate has no home here.” A local graphics designer created a poster with this message on a blue background, and a stylized American flag inside a heart. The message is written in six languages. As the Chicago Tribune reported on February 2, 2017, this poster was so popular it went viral, around the country and around the world and crashed the North Park neighborhood organization’s website.

The “Hate has no home here” message resonates through the stone walls at First Covenant and throughout the West Bayfront Neighborhood where economic disparity is prevalent. To the east is Gannon University, which has many international students from India, the Middle-East and elsewhere around the world. Erie Insurance is headquartered just to the east of the Gannon campus, and is now the largest employer in the City of Erie, employing IT and cyber security workers and plans to hire more. Back at First Covenant, the church has opened its doors for the last seven winter seasons for “Our Neighbor’s Place Overflow Shelter.” During two-week sessions volunteers organize nightly accommodations, a hot meal and a safe place to stay for those who would otherwise be outside during an Erie winter. About five years ago, First Covenant began providing a weekly hot supper on Sundays for those in the community who are food insecure and who would otherwise not have a meal that day. This is the Sunday Supper program that brings together volunteers from across Erie County to provide a meal on Sundays to those who would go without, if not for this outreach ministry. 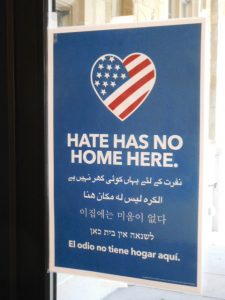 “The Hate has no home here” sign can be seen by all who enter the West 7th Street entrance to the First Presbyterian Church of the Covenant in downtown Erie, PA

By opening wide its doors for new missions and ministries, First Covenant has pledged to be “the caring church in the heart of the city” and by living out what Jesus commanded us to do: “To love thy neighbor.”  “ALL ARE WELCOME in our church,” said Kumer. “That LOVE is the guiding principle here, not HATE.  That this place is one where we focus on God’s love and grace and mercy… Anything that belittles or marginalizes any nationality or group of people is not acceptable here.  The hope is, I suppose, that the more folks see this message, the more they will embrace it.  It is what First Covenant tries to live out in the church’s diverse neighborhood and city.  It is a witness to God’s love for people that doesn’t know human boundaries.” For the Rev. Chris Weichman, Pastor of First Covenant, the message, like the blue poster on the door, is clear. “At First Presbyterian Church of the Covenant we recognize that we are all God’s children.  God’s love does not know our human made boundaries of race, religion, nationality or orientation. We strive to show God’s love to all people.”

First Covenant has plans to further develop its outreach. Kumer said, “In 2019 FPCC will continue to partner with community groups (Martin Luther King Center, Our West Bayfront, Gannon University) and neighbors to promote the health of the people and neighborhood where the church is located.  A growing number of congregation members are welcoming international students into their homes and helping them learn English.  We will welcome another Syrian (refugee) family engagement party to use our fellowship hall.  We will watch for opportunities to have folks from different backgrounds working together…for in doing so, we learn so much about “others” and ourselves—and God’s call to love!”

Dr. Martin Luther King Jr. had a dream for America. Many continue to work to make that dream happen. As a student of Mahatma Gandhi, Dr. King adopted Gandhi’s non-violence teachings for the protests he led in America’s civil rights movement.  Gandhi became the father of the nation of India – leading a non-violence campaign to secure India’s freedom and defeat the British Empire. Gandhi wrote, “be the change that you wish to see in the world.”

No hate, only love begins at home, inside each one of us. “Hate has no home here.” 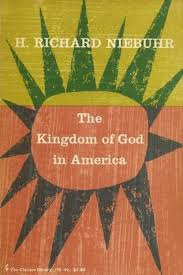 Recent days have found me re-reading the classic book ‘The Kingdom of God in America’ by H. Richard Niebuhr.  The substance of the book was provided in lecture form by Niebuhr more than 80 years ago.  At the same time it is fresh and relevant early in the 21st century.  Throughout the book he addresses the intermingling of faith and culture – and the implications it has for the church.  Included is this quote: ‘As a religious movement the Reformation was characterized above all by its fresh insistence on the present sovereignty and initiative of God.’  From there on he assumes that theological principle as he examines the culture in which he lived and continues to inform us to this day.  He speaks of God’s direct rule in a world where we sometimes think of terms of human sovereignty over medicine, politics, economics, etc.  Check it out!  There is something to be learned by revisiting the old classics!

Antony Robinson, ‘Transforming Congregational Culture’ offers these words:  ‘As a religious establishment, mainline churches tended to rely on a sense of obligation as a powerful motivator for their membership and constituency…[In a] generation of seekers motivation replaced obligation.  If people were motivated, if they found some meaning and value in an experience for them, they would be involved.  If it was only a matter of fulfilling societal obligation, the church was losing its hold on people.  Another – more theological – way to put this is to note that, in many mainline congregations, a religion of good works and achievement seemed to have supplanted a religion of grace.’  (p. 4)

Are we churches of obligation?  Or of motivation?  Are we about good works?  Or grace?

Ouch!  Those are difficult (but important!!) themes to pursue.