“We won’t be around a few years down the road if we continue to do church as usual.”

Written by Marsha MacKinnon, Webmaster for the Presbytery of Lake Erie 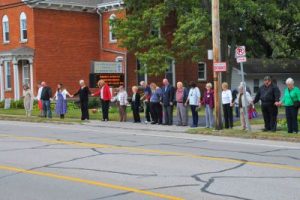 World Communion & Peacemaking Sunday, October 6, 2019 at the First Presbyterian Church of Harborcreek. The congregation stepping out of their comfort zone to pray for peace in the community instead of in the pews.

On World Communion Sunday on October 6, 2019 members of the First Presbyterian Church of Harborcreek, Pennsylvania left the pews and ventured outside to “Pass the Peace” in their community. They lined up in front of the church on Buffalo Road, carrying signs that read “Pray for Peace” and “Let there be Peace on Earth.” This is not a regular activity during Sunday morning worship service. Definitely irregular even a bit “unglued.”

The idea of the “Unglued Church” started in Pittsburgh and became a movement. It grew out of a harsh reality facing many churches today; dwindling attendance, declining membership and diminishing relevance in their communities. Susan Rothenberg is a pastor and a leader of the “Unglued Church Project” in the Pittsburgh Presbytery. In a Presbyterians Today article published October 21, 2016, Rothenberg said “Many of our congregations are at the end of their lifecycle. Many of them will lose what they believed is most dear to them. The neighborhood they once knew. Their familiar space. Their comfortable way of “being church.” The loss congregations face is real, and it is deep. It is loss that deserves to be honored and grieved. To be truly faithful, however, we need to also acknowledge that loss isn’t the whole story or even the end of the story. Often it is only when we have run out of our own ideas that we finally make space for the Holy Spirit to do its work.” 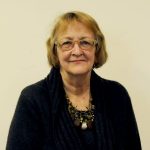 Robin Cuneo is the Commissioned Lay Pastor at the First Presbyterian Church of Harborcreek.

Robin Cuneo is the Commissioned Lay Pastor at First Harborcreek, a suburban church established in 1832 in Harborcreek Township, which is located east of the City of Erie. Cuneo began her ministry at Harborcreek just as the “Unglued Church Project” began to grow and gain traction beyond the Pittsburgh Presbytery.

The process of changing how they ‘do church’ began with open discussion about the future of First Harborcreek.  “Basically, it’s a group meeting for most of a year, looking at what they’ve always done, what is no longer working, and how those things can be changed or let go and what new (ideas) might work. Our facilitator (each church has a different one) was Rev. Rebecca Taylor of Warren,” Cuneo said. The Presbytery of Lake Erie (PLE) has embraced the “Unglued Church Project” and is supporting member churches to explore new possibilities.

The idea of taking the message of “peace” to the streets on World Communion and Peacemaking Sunday came from Elder Barbara Griffith and her husband Brian who are both on the ‘unglued’ team at First Harborcreek. 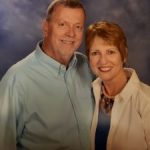 “It has enabled the embers of our faith to be rekindled into a burning flame.  Participation in ongoing and new activities have increased.  The ‘unglued’ team has added members and grown into a new group called the Trailblazers,” Griffith said. “Because of the ‘unglued project’ our church adopted a new conviction statement:  LOVING & SERVING GOD AND OTHERS AS JESUS DOES,” she said.

More is going on than just ungluing members from the pews. “We’ve realized our need to be more visible and active in the community instead of just within our walls. Barb gives me credit for starting that with once-a-week free lemonade during my first summer there. Our front faces busy Buffalo Rd. (Rte. 20) yet we don’t use those doors, so I was afraid passers-by didn’t know there was anything going on in that building. So, I asked for volunteers each week to sit on the front steps with me and wave to traffic and hand out lemonade. You wouldn’t believe the number of waves and honks, and the positive responses,” Cuneo said.

Change never comes easy, yet the members of First Harborcreek were ready to embrace something new. “We have a dream session that quickly recognizes good ideas, and the congregation is VERY good and encouraging about trying new things. It was a bit of short notice, but everyone in church that day (World Communion Sunday) who could walk and stand easily participated – even our two worst walkers/standers,” Cuneo said. 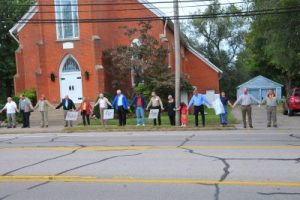 Members of First Harborcreek called this unglued event “Hands Across Harborcreek” and carried signs asking drivers to ‘Pray for Peace.’

They called the unglued action “Hands Across Harborcreek,” and the response from the community has been very positive. “We joined hands and sang “Let There Be Peace on Earth and let it begin with ME”.  We also prayed for 5 minutes for “Peace” as we held each other’s hands.  Starting with our congregation and then to the greater Erie area we continue to hear good comments about this activity including coverage on television and Facebook.  Other local churches have expressed interest in joining us next year.”

“Showing our faith openly on the street was scary at first,” Griffith said. “This was certainly a new trail for us to navigate.  AND we found by ‘PRAYING FOR PEACE’ on the street was a very uplifting experience for all of us and for some of those people in the cars passing-by,” she said.

Pastor Robin and her Trailblazers have embraced the “Unglued Church Project” and the ideas for even more activities to take the church and its members out of its traditional comfort zone are flowing. “We already had a free family fun night. It was a big success. Members also cleared out a disused room in our pre-school building for grandparents to use as a warming center in winter when they don’t want to brave the weather to pick up kids. We’re considering a regular community game time. Plus, ‘unglued’ is cross-pollinating other groups, such as Wine and the Word book group which seems excited to explore some community gathering space. The ideas just seem to be popping all over!” Cuneo said.

A renewed focus on community and serving that community in the name of Jesus Christ is growing at First Harborcreek thanks in part to the ‘Unglued Church Project.’ Elder Barbara Griffith said “our congregation realizes there is no quick fix.  They appear to want to join us on our expedition serving the needs in our community. God’s spirit moved us to go out of our comfort zone.”

Susan Rothenberg of the “Unglued Church Project” came to this conclusion, “often it is only when we have run out of our own ideas that we finally make space for the Holy Spirit to do its work.”